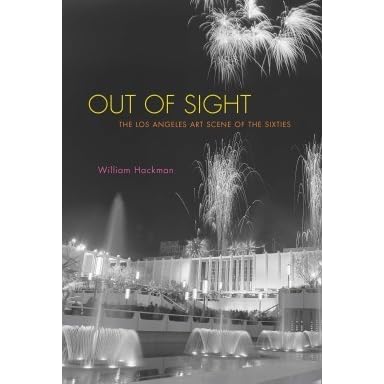 
Rooted in the particulars of Los Angeles, the story is relevant for understanding cultural movements in communities across the country, and perhaps in other countries as well. Too Soon. William Hackman is a former managing editor at the J. Paul Getty Trust and a longtime arts journalist who has written extensively about art, music, and theater for general audiences.


Advanced Search. Too Soon William Hackman is a former managing editor at the J. Event date:. Sunday, April 12, - pm. Event address:. Los Angeles , CA Even the assemblage art movement, topped by the incisive counterculture commitments of a transformational Beat Generation figure like Wallace Berman, could simply be overlooked. Berman might find a comfortable place among the celebrated throng on the cover of "Sgt.

He's directly above John Lennon, two rows up, next to Tony Curtis. But good luck trying to find him in the art section at your local bookstore. That's changing now. If the dearth has not become a flood, for reasons that surely include the economic tempests that have tossed the entire publishing industry, at least it has become a regular flow. One is the now universally accepted understanding that L. Desire to learn its back stories has likewise flourished. The other is 's "Pacific Standard Time," the marvelous citywide array of exhibitions on postwar Southern California art history.

The Getty Trust's sponsorship of the project, which included its own slew of noteworthy exhibition catalogs, redounded as establishment imprimatur. Author William Hackman is a former longtime managing editor in the public relations office at the Getty, although the book is an independent project. He began research on it in , then set the work aside for many years. Notably, coincides with the art market's cataclysmic crash.

It also comes in the immediate aftermath of the s resurgence of L. I say "mostly focuses" because, despite the title, perhaps half the text pre- and post-dates the heady s. Life does not unfold in neat decades. Where that art eruption came from and where it went are part of the book's terrain. Hackman opens with quick sketches of L.

In fact, he goes all the way back to the s and the updated, chamber of commerce-style marketing of the city's myth as a modern El Dorado. The Ferus Gallery story is by now well-known — and maybe even over-known.

But Hackman has worthwhile things to add. Much of it comes in the form of granular detail, which takes the storied tale down off the trapeze and into the sawdust.

It has the texture of life as it is actually lived. Ferus, we learn, was literally a byproduct of the All-City Art Festival, an annual, amateurs-only civic event in Barnsdall Park. Gallery founders Ed Kienholz, the socially and politically minded assemblage artist, and entrepreneurial art maven Walter Hopps were strapped for cash to launch their new venture.

Why LA? The Answer is (More than) Broad

So, hired to run the festival, they surreptitiously lifted the construction materials the city used to build the exhibition booths and hauled them over to La Cienega to build out Ferus. No wonder assemblage art, created from the castoff debris of industrial American culture, occupied such a prominent place in the original Ferus ethos.

The place was constructed of leftovers, the same way the art was made. The cheeky whiff of larceny is apt. One of the book's chief pleasures is Hackman's careful and extensive use of the voluminous oral histories that have been recorded over decades by artists, dealers, critics, collectors, curators and more, and which are archived at UCLA, the Smithsonian Institution's Archives of American Art and elsewhere. The author also has a personal trove of interviews he conducted, some more than 25 years ago.

Sundry distinct voices are stitched together to shape the unfolding narrative.